From Wikipedia, the free encyclopedia
(Redirected from Hänsel and Gretel)
For other uses, see Hansel and Gretel (disambiguation).

"Hansel and Gretel" (also known as Hansel and Grettel, Hansel and Grethel, or Little Brother and Little Sister) (/ˈhænsəl/ or /ˈhɑːnsəl/ and /ˈɡrɛtəl/; German: Hänsel und Gretel[a] [ˈhɛnzl̩ ʊnt ˈɡʁeːtl̩]) is a well-knownfairy tale of German origin, recorded by the Brothers Grimm and published in 1812. Hansel and Gretel are a young brother and sister kidnapped by a cannibalistic witch living deep in the forest in a house constructed of cake and confectionery. The two children save their lives by outwitting her. The tale has been adapted to various media, most notably the opera Hänsel und Gretel (1893) by Engelbert Humperdinck and a stop-motion animated feature film made in the 1950s based on the opera. Under the Aarne–Thompson classification system, "Hansel and Gretel" is classified under Class 327.

Hansel and Gretel are young children whose father is a woodcutter. When a great famine settles over the land, the woodcutter's abusive second wife decides to take the children into the woods. Her plan was to abandon the kids in the woods so that she and her husband will not starve to death. According to her it is mainly because the children eat too much. The woodcutter opposes the plan but finally and reluctantly submits to his wife's scheme. However, while talking about their plan, they are unaware that Hansel and Gretel have overheard them from the children's bedroom. After the parents have gone to bed, Hansel sneaks out of the house and gathers as many white pebbles as he can, then returns to his room, reassuring Gretel that God will not forsake them.

The next three days, the family walks deep into the woods and Hansel lays a trail of white pebbles. After their parents leave them, the children wait for the moon to rise before following the pebbles back home. They return home safely, much to their stepmother's horror. Once again provisions become scarce and the stepmother angrily orders her husband to take the children farther into the woods and leave them there to die. Hansel and Gretel attempt to leave the house to gather more pebbles, but find the doors locked and escape impossible. 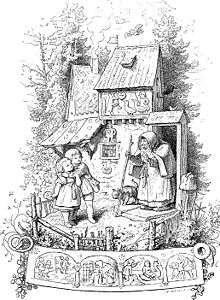 The following morning, the family treks into the woods. Hansel takes a slice of bread and leaves a trail of bread crumbs to follow home. However, after they are once again abandoned, the children find that birds have eaten the crumbs and they are lost in the woods.

After days of wandering, they follow a beautiful white bird to a clearing in the woods, where they discover a large cottage built of gingerbread and cakes with window panes of clear sugar. Hungry and tired, the children begin to eat the rooftop of the candy house when the door opens. A hideous old hag emerges and lures them inside with the promise of soft beds and delicious food. Unaware that their hostess is a bloodthirsty witch who built the gingerbread house to lure children to her to cook and eat them, the children enter the house.

The following morning the witch locks Hansel in a cage, and forces Gretel into becoming a slave. The witch force-feeds Hansel regularly to fatten him up, but he cleverly offers a bone and the witch feels it, thinking it is his finger. Due to her blindness, she is fooled into thinking Hansel is still too thin to eat. After weeks of this, the witch grows impatient and decides to eat Hansel anyway.

The witch prepares the oven for Hansel, but decides to kill Gretel as well. She coaxes Gretel to open the oven and prods her to lean over in front of it to see if the fire is hot enough. Sensing the witch's intent, Gretel pretends that she does not understand what she is being told to do. Infuriated, the witch demonstrates and Gretel instantly shoves her into the oven and slams and bolts the door shut. Gretel frees Hansel from the cage and the pair discover a vase full of treasure and precious stones. Putting the jewels into their clothing, the children set off for home.

A swan ferries them across an expanse of water. When they reach the house, they discover that their stepmother has died and that their father has spent his days mourning his children's deaths. When he sees them, he becomes happy again. The family becomes rich thanks to the witch's treasure and they all live happily ever after. 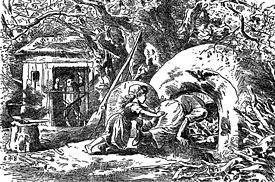 Jacob and Wilhelm Grimm heard "Hansel and Gretel" from Wilhelm's friend (and future wife) Dortchen Wild[1] and published it in Kinder - und Hausmärchen in 1812.[2] In the Grimm tale, the woodcutter and his wife are the children's biological parents and share the blame for abandoning them. In later editions, some slight revisions were made: the wife is the children's stepmother, the woodcutter opposes his wife's scheme to abandon the children and religious references are made. The sequence where the swan helps them across the river is also an addition to later editions.[3]

The fairy tale may have originated in the medieval period of the Great Famine (1315–1321),[4] which caused desperate people to abandon young children to fend for themselves, or even resort to cannibalism.

Folklorists Iona and Peter Opie indicate in The Classic Fairy Tales (1974) that "Hansel and Gretel" belongs to a group of European tales especially popular in the Baltic regions, about children outwitting ogres into whose hands they have involuntarily fallen. The tale bears resemblances to the first half of Charles Perrault's "Hop-o'-My-Thumb" (1697) and Madame d'Aulnoy's "Finette Cendron" (1721). In both tales, the Opies note, abandoned children find their way home by following a trail. In "Clever Cinders", the Opies observe that the heroine incinerates a giant by shoving him into an oven in a manner similar to Gretel's dispatch of the witch and they point out that a ruse involving a twig in a Swedish tale resembles Hansel's trick of the dry bone. Linguist and folklorist Edward Vajda has proposed that these stories represent the remnant of a coming-of-age rite-of-passage tale extant in Proto-Indo-European society.[5][6] A house made of confectionery is found in a 14th-century manuscript about the Land of Cockayne.[1]

The fact that the mother or stepmother dies when the children have killed the witch has suggested to many commentators that the mother or stepmother and the witch are metaphorically the same woman.[7] A Russian folk tale exists in which the evil stepmother (also the wife of a poor woodcutter) asks her hated stepdaughter to go into the forest to borrow a light from her sister, who turns out to be Baba Yaga, who is also a cannibalistic witch. Besides highlighting the endangerment of children (as well as their own cleverness), the tales have in common a preoccupation with food and with hurting children: the mother or stepmother wants to avoid hunger, while the witch lures children to eat her house of candy so that she can then eat them.[8] Another tale of this type is the French fairy tale The Lost Children.[9] The Brothers Grimm also identified the French Finette Cendron and Hop o' My Thumb as parallel stories.[10]

It is important to note that in Grimm's Fairy Tales this story is called Roland and May-Bird.[11] The Brothers Grimm story called Hansel and Gretel tells a quite different tale: Since their mother died and their father remarried, Hansel and his sister Gretel decided to run away to try their fortune in the world. As they enter a wood their cruel step-mother (who is also an evil fairy) enchants streams in the forest to turn Hansel and Gretel into animals. At Gretel's warning Hansel avoids the first and second streams (which would have turned him into a wolf or tiger respectively), but is too thirsty to resist the third, which turns him into a fawn. They both wander on until they find an abandoned cottage, where they move in and make a life for themselves. One day a king and his men are hunting in the forest and see Hansel. They give chase to him and eventually track him down to the cottage. The king enters and falls in love with Gretel, they get married and Hansel moves in with them. Gretel then tells the king of what has happened and he punishes the fairy step-mother, which turns Hansel back into a human.[12] 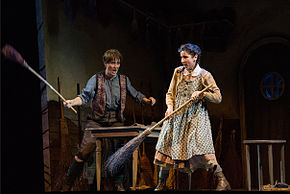 Hansel and Gretel are young children whose father is a woodcutter. When a great famine settles over the land, the woodcutter's abusive second wife decides to take the children into the woods. Her plan was to abandon the kids in the woods so that she and her husband will not starve to death. According to her it is mainly because the children eat too much. The woodcutter opposes the plan but finally and reluctantly submits to his wife's scheme. However, while talking about their plan, they are unaware that Hansel and Gretel have overheard them from the children's bedroom. After the parents have gone to bed, Hansel sneaks out of the house and gathers as many white pebbles as he can, then returns to his room, reassuring