Not , every day embroidery ...

The Broom - and Two Bucket of Water

The Tree , The Garden And

The Herbs of Light & Hope

From Wikipedia, the free encyclopedia
(Redirected from Herbs)
This article is about culinary, medicinal, and spiritual herbs. For the technical usage, see herbaceous plant. For other uses, see Herb (disambiguation). 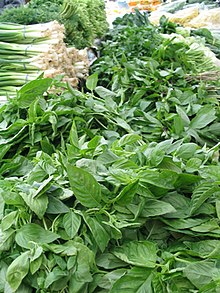 In general use, herbs are any plants used for food, flavoring, medicine, or perfume. Culinary use typically distinguishes herbs from spices. Herbs refer to the leafy green parts of a plant (either fresh or dried), while a "spice" is a product from another part of the plant (usually dried), including seeds, berries, bark, roots and fruits. edit !

In botanical English the word "herb" is also used as a synonym of "herbaceous plant".

Herbs have a variety of uses including culinary, medicinal, and in some cases spiritual usage. General usage of the term "herb" differs between culinary herbs and medicinal herbs. In medicinal or spiritual use any of the parts of the plant might be considered "herbs", including leaves, roots, flowers, seeds, resin, root bark, inner bark (and cambium), berries and sometimes the pericarp or other portions of the plant. NOT SO - TO READ

The word "herb" is pronounced /ˈhɜːrb/ by most English-speaking countries,[1] but /ˈɜːrb/ is common among North American speakers and those from other regions where h-dropping occurs.

A bundle of thyme
See also: List of culinary herbs and spices

Culinary herbs are distinguished from vegetables in that, like spices, they are used in small amounts and provide flavor rather than substance to food.

Herbs can be perennials such as thyme or lavender, biennials such as parsley, or annuals like basil. Perennial herbs can be shrubs such as rosemary, Rosmarinus officinalis, or trees such as bay laurel, Laurus nobilis – this contrasts with botanical herbs, which by definition cannot be woody plants. Some plants are used as both herbs and spices, such as dill weed and dill seed or coriander leaves and seeds. Also, there are some herbs such as those in the mint family that are used for both culinary and medicinal purposes.

Some plants contain phytochemicals that have effects on the body. There may be some effects when consumed in the small levels that typify culinary "spicing", and some herbs are toxic in larger quantities. For instance, some types of herbal extract, such as the extract of St. John's-wort (Hypericum perforatum) or of kava (Piper methysticum) can be used for medical purposes to relieve depression and stress.[medical citation needed] However, large amounts of these herbs may lead to toxic overload that may involve complications, some of a serious nature, and should be used with caution.

Herbs have long been used as the basis of traditional Chinese herbal medicine, with usage dating as far back as the first century CE[2] and far before. In India, the Ayurveda medicinal system is based on herbs. Medicinal use of herbs in Western cultures has its roots in the Hippocratic (Greek) elemental healing system, based on a quaternary elemental healing metaphor. Famous herbalist of the Western tradition include Avicenna (Persian), Galen (Roman), Paracelsus (German Swiss), Culpepper (English) and the botanically inclined Eclectic physicians of 19th century/early 20th century America (John Milton Scudder, Harvey Wickes Felter, John Uri Lloyd). Modern pharmaceuticals had their origins in crude herbal medicines, and to this day, some drugs are still extracted as fractionate/isolate compounds from raw herbs and then purified to meet pharmaceutical standards.

Certain herbs contain psychoactive properties that have been used for both religious and recreational purposes by humans since the early Holocene era, notably the leaves and extracts of the cannabis and coca plants. The leaves of the coca plant have been chewed by people in northern Peruvian societies for over 8,000 years,[3] while the use of cannabis as a psychoactive substance dates back to the first century CE in China and northern Africa.[4]